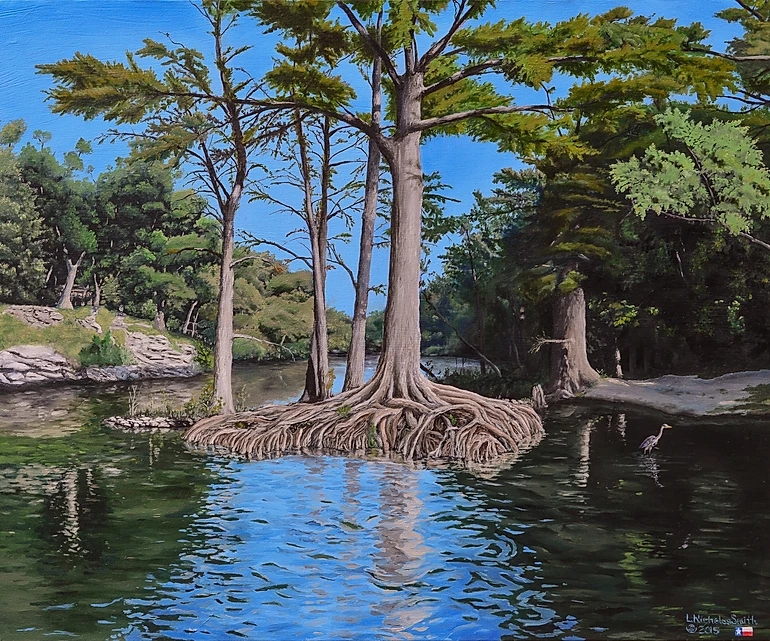 L.Nicholas Smith was born and raised among the Appalachian foothills of the southern Ohio River valley. Being blessed with sharp visual acuity, colors, dimensions, and shapes have dominated his senses. Childhood curiosity to draw the intensity of what he saw began on his household walls, TV, and pretty much on whatever he could find. As a teenager his most prestigious recognition was winning the Congressional Art Competition. That piece was displayed at the U.S. Capitol Building in Washington D.C.

Fine art needs focus and patience. This is a challenging combination for most young men. At 17 years old, Nick enlisted as an airborne infantryman in the US active duty Army. By 19, he completed his first combat tour in Operation Desert Shield and Desert Storm with the 82nd Airborne Division in the Persian Gulf War.

After the busy years serving as a paratrooper, academia seemed like a welcome change of pace. While in college, he simultaneously served in the Ohio Army National Guard as an engineer. He was deployed numerous times while in the Guard for international and domestic humanitarian and disaster relief operations.

​Nick graduated with a Bachelor of Fine Arts degree from The Ohio State University with a concentration in classical painting and drawing. Instead of attending his graduation ceremony, Nick opted to lead his company on a disaster relief deployment to Nicaragua. Upon his return, he felt his military experience was still needed so, he volunteered again to serve in the active duty Army. He earned his commission as an Army Medical Service Corps Officer after completion of Officer Candidate School. Following a tour in the Republic of Korea, he completed flight school to become a pilot qualified on the UH-1 Iroquois and UH-60 Blackhawk helicopters.

​Multiple overseas and combat deployments occurred throughout the rest of his military career; honorably retiring from active duty in 2015, Nick finally feels as if he has contributed enough to our country and is now ready to cultivate personal ambitions.

​Following more than 25 years of regular abuse from a physically demanding profession, he surprisingly still has that above average eyesight and also now has a lot of patience. Nick’s focus has returned to painting. His currently available portfolios include the Military Collection, Texas Collection, Sampler Collection, Color Collection, and Special Commissions.

​Nick has led a diverse life living all over the world. He owns a piece of the Texas hill country where his studio sits nestled in the trees on the back of his homestead property. This is where he enjoys successfully completing his wife’s honey-do-list, raising their two children and finally getting uninterrupted time to paint.

To learn more about Nick, please visit HIS WEBSITE