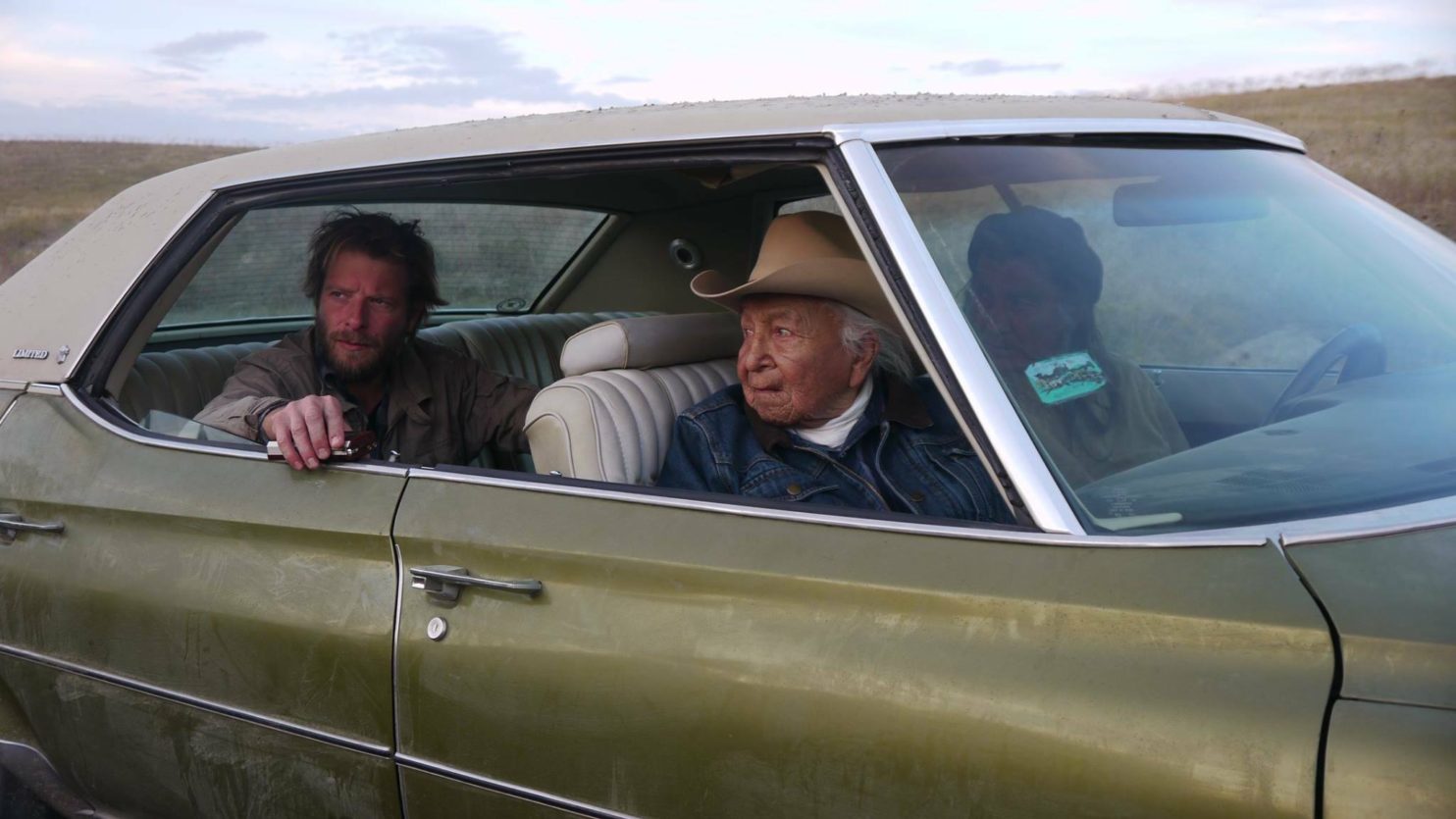 Christopher Sweeney and Dave Bald Eagle in Neither Wolf Nor Dog.

USVAA is proud to announce a new program, the USVAA Colleague of the Month as a means of our continuing efforts to highlight the talent level of the military veterans we work with in the arts, humanities and entertainment industry. This month we’re featuring the work of actor and fine artist Christopher Sweeney (USMC).

Of Hats and Hat Makers, Christopher Sweeney Weighs In on the Life of an Artist

Christopher Sweeney served in combat (Silver Star) and upon completing his service in the Marine Corps, attended the University of Washington. Receiving a B.A. in Political Science, Chris subsequently moved to Los Angeles to pursue his goals as an artist.

He has appeared on stage in Bug, Zoo Story, If All the Sky Were Paper, and on screen in numerous roles including Chasing Mavericks, The Veil, Curio Shop and The Canyon.  After years of hard work, his career as an actor is in full swing and he currently stars in the critically acclaimed film, Neither Wolf Nor Dog  (selected theaters across the U.S. and Canada) where he plays author Kent Nerburn, and is featured alongside fellow veteran and actor Dave Bald Eagle.

Balancing his aspiration to be both an actor of note and a fine artist, Sweeney has faced challenges before in his life. It’s tough enough to pursue one or the other, but what makes him unique is the quality of his work in both fields. He’s now an accomplished fine artist who has had a number of gallery exhibitions around Los Angeles and Washington State along with the completion of a number of commissioned works in the past several years.

Chris was kind enough to speak to us at length during rehearsals for his latest performance this past week in Andrew Carroll’s powerful war letters play, If All the Sky Were Paper, with Annette Bening and Dan Lauria at the Kirk Douglas Theatre.

USVAA: What made you want to become both a fine artist and an actor?

CS:  My passion for the arts has been a gradual process of introspection and self-discovery, trial and error, as well as the keen observation of the world around me. As for a description of me as an artist or actor, I’ve always believed that the delineations between various art forms are grey if not invisible. As for acting, I’m a bit of a storyteller, but initially, it was the need for the cathartic healing that the performer’s life provided. Once again, I’ll state that it has been a gradual process of becoming self-aware, coupled with a burning desire to reflect society back upon itself.

USVAA: What do you think is important about being an artist?

CS: The most important aspects of being an artist are honesty and truly having the ability to listen. The artist will become a deeply empathic individual that has a keen understanding of the human condition.

USVAA: What artists, actors and directors inspire you?

CS: That’s a pretty long list so I’ll narrow it down to one in each discipline. I would have to say that I hold Vladimir Nabokov in stratospheric esteem. He was the king of overcoming obstacles. He believed that if his literature was not difficult and often times encrypted that it was not worthy of the readers time. When it comes to filmmakers, I would have to say that Frank Capra, one of the greatest empathic storytellers of our time. As for painters, Lucian Freud was a master among the gods. I read once that his typical composition took him eleven months of assiduous study and execution to complete.

USVAA: What is the most important thing you took away from your military service?

CS: It’s a little difficult to break it down, but if I had to choose I would say it was the ability to improvise, adapt, and overcome.

USVAA: Would you serve in the military again?

CS: I know too much about the world to ever make that leap again. As much as I appreciate what I gleaned from my military experience, I’m fully aware that there’s a reason the target demographic is young, naïve recruits.

USVAA: Did your military service influence your work as an artist and actor?

CS: Absolutely! Every experience we have in life informs us in all of our creative endeavors.

CS: I think, at this phase in my life, people who truly know me have ceased to be surprised by pretty much anything about me. However, I do strive to amaze with everything that I create or I’m involved in. Of course, I don’t always succeed. But, you can bet your ass that I’ve learned from every failure.

USVAA: How has your work in theater informed your work as an actor?

CS: Everyone approaches theater with a different agenda. My particular approach to theater has shifted and morphed continuously since I first stepped on stage. It’s an amazingly liberating to perform in public. At this phase in my career the most important thing about theater is that it challenges the viewer’s notions of truth, justice and the human condition, thereby creating a meaningful dialogue with the audience.

USVAA: You were awarded a Silver Star for your service during your combat tour in the Marine Corps. We know it’s a tough subject for you to discuss, but can you tell us a little about the award’s impact on your life?

CS: I was first notified I would be receiving a higher commendation while still in the Kuwaiti Desert. The initial adrenaline rush was gratifying; being singled out for your bravery, courage and valor in combat looks quite appealing on the surface. It wasn’t until I returned stateside that I started to examine the political motivations of our government and developed misgivings about the award. I went a long time hiding that I had received the award. It felt weird when friends and family started to bandy it about like some sort of hero’s pedigree. Now that I’ve had some time to process the experience, I take the positive for what it is and try and learn from the negative aspects. I will say that I’m extremely proud that not one of my comrades died in battle and if any single action I may have taken helped ensure there safety, I am immensely grateful.

USVAA: After many roles in films, you’re now starring in Neither Wolf Nor Dog, the film adaptation of Kent Nerburn’s extraordinary, award-winning novel about the life of a Native American as told through the eyes of an Anglo writer. What can you tell us about the experience?

CS: Words cannot express the joy I have experienced as a result of being a part of Neither Wolf Nor Dog. My time spent with Dave Bald Eagle, alone, was worth the time and effort. Steven Lewis Simpson bestowed a great honor upon me by asking me to play Kent Nerburn. Just like my military experienced changed me forever, so too will my time making and promoting this film. My own heart has been rendered so vulnerable and bare as a result of working with the inspirational Lakota people. My entire cultural lexicon has been purged and metamorphosed.

USVAA: After you left college, you spent some time in a band or two. Do you want to sing again?

CS: Do I want to sing again? I was just in discussion with a fellow female artist about the possibility of working on some harmony pieces. So, the answer is yes, I have every intention of continuing to sing. It’s just a matter of when the hat maker finishes that particular hat.