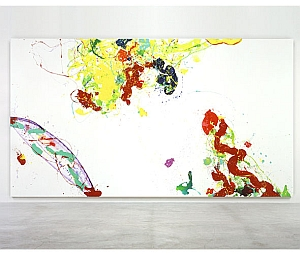 One of the twentieth century’s most profound Abstract Expressionists, American artist Samuel Lewis Francis (1923-1994) is noted as one of the first post-World War II painters to develop an international reputation. Francis created thousands of paintings as well as works on paper, prints and monotypes, housed in major museum collections and institutions around the world. Regarded as one of the leading interpreters of color and light, his work holds references to New York abstract expressionism, color field painting, Chinese and Japanese art, French impressionism and his own Bay Area roots.

He attended the University of California, Berkeley as pre-med student, but was called to military service. He trained to become a pilot until a plane accident during Army Air Corps training (and subsequently progressing illness from spinal tuberculosis) hospitalized him for years (1943–1947). He began painting while lying prone in his hospital bed first in Denver Colorado at Fitzsimons Hospital, and then at Fort Miley Hospital in San Francisco (1945–1947).

After graduating from Cal Berkeley in 1950 with a degree in art, Francis moved to Paris, where he would go on to be named by Time Magazine as, “the hottest American painter in Paris these days.” A transformative period of his career, Francis immersed himself in a study of Monet’s Water Lilies and was influenced by his close friendships with the Matisse family and artists Al Held, Joan Mitchell, and Jean-Paul Riopelle.