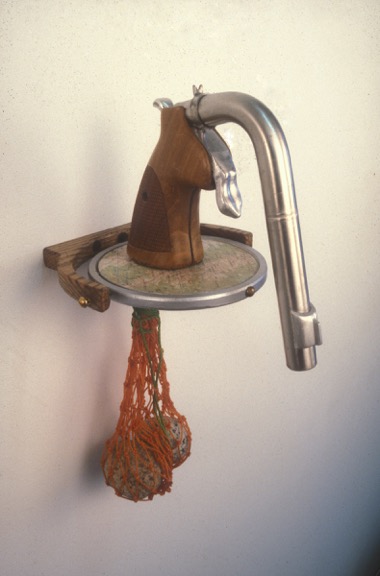 Ken Hruby is a sculptor, professor and US Army veteran. Hruby’s service began at West Point in 1961 and ended 21 years later. By that time he had served two combat tours as an infantryman in Vietnam, guarded the DMZ in Korea and held numerous command and staff positions all over the world. After his discharge, Hruby took immediately to the arts, studying at the School of the Museum of Fine Arts, Boston. His art has been featured in several well-reviewed solo and group shows and shown at the National Vietnam Veterans Art Museum in Chicago. As one review summed up: “Most Vietnam art is angry venting: Hruby’s is full of ambiguity, irony, even wit and that opens it up to all of us who didn’t go to war. Hruby makes poetry, not propaganda.”

In civilized cultures there has always been an ambivalent relationship between soldier and society.

In the case of the Vietnam Veteran, our reception by the American society upon return from Southeast Asia was less than hospitable and often openly hostile. The experiences beg for release in some form and the release will surface in one way or another. In my case sculptural images are sparked by the war experience; they arc across the minefield of memory like tracers. They hold me hostage, controlling my waking and sleeping hours, until I deal with them. Sometimes the art flows effortlessly like whistling. Usually not.

Some images never do coalesce. I work and rework them and still they remain ephemeral visions like those from my other life as a soldier. Now, years later, images form and reform out of the mist of what was reality, steeped in a quarter century of impure memory. They tease and nag. They ebb and flow. I never know where they will lead. When a sculpture ensues, I am as astonished as anyone.

But these memories of Vietnam are showing signs of age. Mostly they remain hidden just beneath the surface of consciousness, like mines laid in a rice paddy, ready to explode and echo across the decades when the right pressure is applied. Just what it is that trips them remains a mystery; sometimes a sound, occasionally a word, usually a smell. For more information on the artist, visit his website.