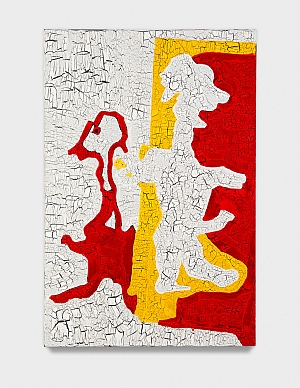 Ed Moses (born April 9, 1926) is an American artist based in the Los Angeles area and considered one of the most innovative and central figures of postwar West Coast art.

He was accepted into the Navy Medical Corps and served as a scrub assistant, assisting in operations at the San Diego Naval Hospital. Upon leaving the Navy in 1947 (age 22) Moses enrolled in a pre-med program at Long Beach City College. While very intelligent, Moses had poor memorization skills and as a result was not accepted into medical school in the United States.

Moses exhibited at the legendary Ferus Gallery in 1957 along with fellow prominent artist figures including Wallace Berman, Billy Al Bengston, Robert Irwin, Craig Kauffman, John Altoon, Larry Bell (artist) and Ed Ruscha. Over the next five decades, Moses would soar to prominence, gaining attention not only throughout Los Angeles and the United States, but internationally as well. Moses was the first to do so of his generation since John McLaughlin, Richard Diebenkorn and Sam Francis. While these artists developed a mature style, Moses has managed to resist any stylized approach and remain more experimental, playing to his curiosities by moving past what he already knows.